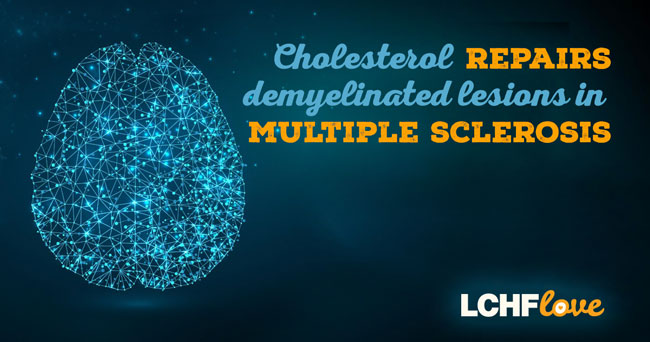 Multiple sclerosis is a chronic inflammatory disease of the central nervous system. The inflammation processes damage the myelin, the lipid-rich insulating layer around some nerve cells, creating demyelinated lesions. Cells with damaged or lacking myelin can’t function properly and all this can lead to neurodegeneration. To make things worse, in multiple sclerosis the body’s own capability to remyelinate the nerve cells is diminished, whereas in healthy individuals remyelination is normal and protects us against this unwelcome process.

More than a decade ago, a group of German scientists showed on mice that dietary cholesterol can mitigate the range of demyelination by restoring the oligodendrocytes normal function.

The brain has to have enough cholesterol to renew damaged myelin and in the new study by the same German group it was shown that the decreased levels of brain cholesterol is a factor in the diminished remyelination capacity. Using mice they found out that dietary cholesterol enters the nervous system, speeds up the remyelination processes and above all it doesn’t negatively affect inflammation.

So why is there a lack of cholesterol in the affected brain? There seems to be a range of dysfunction: lack of certain enzymes, a disruption in the cholesterol transport between cells because of the lack of apolipoprotein E, brain-blood barrier disruptions and decrease of the blood cholesterol levels also probably contributes to the impairment of cholesterol homeostasis in the brain (Berghoff et al., 2017).